A surprisingly good novel. A catholic, Chinese bishop has been in jail in China for decades. His life is one of regular torture and solitary confinement. In Rome, the Pope wants the Chinese bishop released covertly. Using a former Naval Seal and other former CIA people an operation is planned to go in and get the chinese bishop out. But the Pope dies before the operation begins. They have only the time it takes for a new Pope to be chosen to complete the operation. A fun, well written novel.

Another ‘church’ book by Thom Rainer (and co-authored by Ed Stetzer). Very disappointing. Lots of old material in this book. Nothing new. Nothing that has not already been analyzed and published by Mike Riddell, Gerard Kelly and others. My church in London was following these practices in the early 90’s in the UK.

As a minister, read this book. The hardest part of this book will be the conflict between the freedom you will experience as you read and the realization that you MUST, MUST put it into practice, NOW.

This was my night-time reading with my 7 year old son. Although just beginning 2nd grade, Sam has a reading level of a 4th grader and we read through this wonderful. short biography of John Newton.

We must not confuse busyness with spiritual growth. Far from it. Busyness may be preventing us from growing and leading us to a place where our identity is consumed with what we do, not with who we are. Fil Anderson has written a book which should be a warning to ministers not to immerse themselves into their work but to immerse themselves into Christ and prayer. Two many confuse the two with disastrous consequences.

Another book which my 7 year old and I read together. This is a good book, if not a little biased. I need to do some correction while reading it with Sam. It says it has a reading age of 9 years old. Sam is two or three grades ahead with his reading but even so, I think it was still a little older than that. But an enjoyable read still. 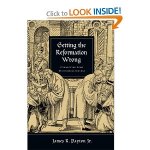 This challenging quite comes from James Payton Jr’s book Getting The Reformation Wrong:

Even so, the multitudes of church splits which have ensued in Protestant ranks – beginning already in the 16th century, increasing in frequency subsequently and achieving breakneck pace by the early twenty first century – have unquestionably managed to undermine the integrity of the gospel. The converse of what Jesus Christ prayed for (John 17) has come to pass: our lack of unity has rendered the gospel less credible in the eyes of the world. In this regard, we have sown the wind and have reaped the whirl wind.  pg 257

Be contentious and zealous, but only about the things that relate to salvation.

Clement of Rome Letter Of The Romans To The Corinthians 45:1

Please notice the title of the book – it does not say that the reformation was wrong, but that there is misunderstanding about the reformation, especially in the Church today, which needs to be acknowledged. The author is a protestant evangelical scholar and he is not seeking in any way to undermine the (important) successes of the reformation. However, to view the reformation as nothing but a success is a problem. To assume that the reformation is beyond criticism or critical analysis is quite simply nonsense which is why , in my opinion, this book has been a longtime coming.

Payton’s analysis is simple. The reformation was a success. The medieval church had obscured the apostolic message and the reformation pulled back the curtain to reveal once again the gospel message. However, there is a tragedy to the reformation, and that tragedy is that the reformation is by nature schismatic. Even from the earliest times the reformers were divided amongst themselves. Eventually Lutherans denounced Melanchthon, Zwingli’s followers entered conflict with Bucer’s followers. Lutheran and Reformed camps viciously criticized each other, eventually claiming the truth for their side. This has continued in the aftermath of the reformation. We now have 26,000 Protestant denominations.

This is more than a historical issue for Payton. He challenges the reader to examine the words of Jesus in John 17:20-23 (I pray not only for these, but also for those who believe in Me through their message. May they all be one, as You, Father, are in Me and I am in You. May they also be one  in Us, so the world may believe You sent Me. I have given them the glory  You have given Me. May they be one as We are one. I am in them and You are in Me. May they be made completely one, so the world may know You have sent Me and have loved  them as You have loved Me.)

Payton writes, “If as Christians (of whatever denominational stripe) we believe that Jesus Christ had some insight into what would affect the reception of the gospel as proclaimed by his apostles, then we cannot bypass the correlation he explicitly declares here (John 17). According to Jesus Christ himself, for those who would come to faith in him through the apostolic message to be one would constitute a compelling argument to the rest of the world that God the Father had, indeed, sent his son into the world. Conversely, for such believers not to be one would offer the world at least an excuse not to believe the gospel.

Too often, Protestants have divided over non-salvation issues such as the Lord’s Supper, predestination versus free will, eschatology, church governance, charismatic gifts, creation vs evolution, ordination of women, resulting in the fragmentation of the body of Christ. Payton’s book raises the question – is the church today really what it should be? 26,000 or more denominations fighting over small issues of theology?

This is a wonderful balance to reformation studies and a book which should not just be read but thought through. Yes, for some, this may be a provocative read. But it will be a worthwhile and challenging read. I would recommend this book as required reading for reformational studies.

The Epistle to the Hebrews sees the Mass in light of the Temple’s animal sacrifices (Heb 13:10). Many modern scholars have noted parallels between the Mass and the most commonly offered sacrifice of Jesus’ day: the thank-offering (in Hebrew, todah). The todah was a sacrificial meal of bread and wine, shared with his friends, given in thanksgiving for God’s deliverance. The Talmud records the ancient rabbis’ teaching that, when the Messiah has come, “all sacrifices will cease except the todah sacrifice. This will never cease in all eternity.” When the Jews translated their Scriptures into Greek, they rendered the word todah as eucharistia, the word from which we get “Eucharist.”

For all those who belong to God and Jesus Christ are with the bishop, and all those who repent and enter into the unity of the church will belong to God, so that they may be living in accordance with Jesus Christ. 3 Do not be misled, my brothers and sisters: if any follow a schismatic, they will not inherit the kingdom of God. If any hold to alien views, they disassociate themselves from the passion.   4 Take care, therefore, to participate in one Eucharist (for there is one flesh of our Lord Jesus Christ, and one cup that leads to unity through his blood; there is one altar, just as there is one bishop, together with the council of presbyters and the deacons, my fellow servants), in order that whatever you do, you do in accordance with God.

What exactly does it mean to be ‘evangelical’? Today the term is so disputed that it is even being called irrelevant. Others prefer to call  themselves ‘post-evangelical’. Roger Olson (whose writings, while I do not agree with him, I enjoy) has written that the term “evangelical” is an essentially contested concept without boundaries. This is in contrast to David Bebbington’s classic view that there are four key ingredients to evangelicalism – conversion; focus on the Bible; life of service for God; Christ’s death as the crucial matter in providing atonement.

Mark Noll and this book, would disagree with Roger Olson, and side towards David Beggington. The Rise Of Evangelicalism is the first of five books which will examine the development of evangelicalism through the ages. This volume looks at it’s beginnings (1730’s – 1790’s)

Noll shows us that evangelicalism came out of a convergence of three main movements – the Anglicanism; the puritan movement (which did not think the established church was reformed enough) and European pietism. Profiling Jonathan Edwards, George Whitefield and John and Charles Wesley, Noll shows how one of the key elements (and boundaries) of evangelicalism and the Revivals experienced at this time was the emphasis and proclamation of the new birth found in Christ Jesus and the power of godliness & individual transformation.

This book is not just a helpful introduction to the roots of evangelicalism and what evangelicalism looked like, but it is also a wonderful introduction to the key men who were instrumental during the great revival of the 18th century. Noll’s scholarly and well written style makes this an enjoyable and informative read. One additional feature of this book is the wonderful bibliography at the back of the book.