On vacation this summer I read a novel called Betrayal. It is a novel about the great French reformer John Calvin (whose 500th birthday is this year.) The novel is written from the perspective of a contemporary of Calvin, Jean-Louis, who had a life long hatred of him. One of my favorite parts of the book is at the beginning.  Jean-Louis and another boy hide in a tree knowing that Calvin often comes to the river bank to pray. They want to play a trick on Calvin. When Calvin arrives, Jean-Louis, rolling a piece of leather into a cone and “making my voice sound as far off and bishop like as I could manage”  begins to speak out words like I have heard your signings and You are a chosen vessel set apart to serve me. The want to trick and humiliate Calvin. But Calvin is not fooled and walks away. The dialogue continues:

“That did not go so well,” said Martin, his eyes following the disappearing figure. “I am not sure that you got God’s voice precisely as it is.”

I turned on him. “And you know what God’s voice sounds like?” I growled.

What a wonderful imagine – Calvin knew the voice of God and so when a rival or even false voice sounded he knew that it was false.

Which begs the question, do we know the voice of God that well? Can we distinguish what is God’s voice and what is not God’s voice?

The Bible is full of exhortations to obey the voice of the Lord – Exodus 23 – Pay careful attention to him and obey his voice, Deut 13 You shall walk after the Lord your God and fear him and keep his commandments and obey his voice, Deut 30 – loving the Lord your God, obeying his voice and holding fast to him, John 10 And I have other sheep that are not of this fold. I must bring them also, and they will listen to my voice and John 18 Everyone who is of the truth listens to my (Jesus) voice.

This is just a tiny sample of the some of the verses in scripture. We are to be a people who can hear the voice of the Lord, both personally and as a community. How do we learn what the voice of the Lord sounds like? Through his word, the scriptures. As we read the Bible we learn about his character, his promises, what he asks of us and what he dislikes, and how he wants us to live and how we can be in his presence. Through reading ABOUT God and how God deals with humanity we begin to understand something of the character of God.  But if we leave it there we simply have a detached knowledge about God. Prayer draws us from knowing ABOUT God to KNOWING God personally and intimately. When we spend time praying to him, talking with him, we will begin to cultivate a living relationship with him, giving God the opportunity to speak to us. It’s the combination of knowing what the Bible teaches and our own times of speaking with the Lord that helps us to learn to know and recognize his voice.

John 10:4 who When he has brought out all his own, he goes before them, and the sheep follow him, for they know his voice.

…. this is our whole church Adult Education program for the fall. We have around 80 people signed up to read 12 pages of the Bible everyday for 90 days and each week gather into groups to discuss what they have read. This is going to be an exciting fall for us here at the church – 80 people immersed in the scriptures for three months!  It reminds of what the great preacher and evangelist George Whitefield said:

Above all my mind being now more opened and enlarged, I began to read the holy Scriptures upon my knees, laying aside all other books, and praying over, if possible, every line and word. This proved meat indeed and drink indeed to my soul. I daily received fresh life, light, and power from above. I got more true knowledge from reading the book of God in one month than I could ever have acquired from all the writings of men.

Many (maybe too many) reformed preachers like preaching Titus 1:5-9. IMHO very few are any good. But here is a great sermon on Titus 1:5-9. It was preached a few years back at All Souls Langham Place London by a friend of mine. Enjoy!!

We are so fortunate to have as a member of our Church Bishop Fitz Allison. I have especially appreciated his wisdom on our Tuesday morning Bible Studies. His insightful and challenging questions (usually when I am teaching the passage) deepen my understanding of the Bible.

He preached a great sermon this morning. Listen to it below. 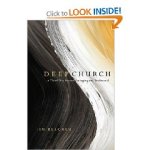 How far is too far? Where in terms of theology, ecclesiology, worship, preaching and mission do we draw the line in the sand and say this is too far and has lost sight of orthodox or biblical Christianity. And with regards to ecclesiology, or worship, or contextualization, where the Bible is interpreted differently, by what criteria do we even being to decide that something is too far?

These are some of the issues that have been raised with regards to the Emerging Church movement. Criticisms and even charges of heresy have been leveled against Emergent leaders and their methods, while the emergent leaders accuse the traditionalists of being out of touch, irrelevant and stuck in the past.

Jim Belcher’s new book, Deep Church, looks to steer a third way between the emergent movement and the traditionalist / reformed approach. Why a third way? According to Belcher there is good to be found in both positions. The birth of Emergent came from the desire for the church to be more engaged with our postmodern culture. They raise excellent questions at some of the irrelevance and detachment of the traditional church. Each chapter of Deep Church is an analysis, critique and response to seven ‘protests’ of the emerging movement against the ‘traditional’ Church; 1. Captivity to enlightenment rationalism, 2. A narrow view of salvation, 3. Belief before belonging, 4. Uncontextualized worship, 5. Ineffective preaching, 6. Weak ecclesiology & 7. Tribalism (i.e. unwilling to engage the culture). The traditional church in response claims to stand on 2000 years of historic Christianity which they feel the emergent movement is simply discarding. Of course the debate (or argument) that usually takes place between these two sides too often focuses on the extremes of each tradition, and making any unity or move towards each other very difficult.

Belcher writes clearly and with objectivity. He represents both sides with fairness acknowledging both the good and the bad. He also writes as someone who has traveled this journey and personally wrestled with the issues on both an intellectual and practical level. Neither is he writing from a position of here-say or assumption. Belcher has visited the churches, spoken with and has even becomes friends of many of the leading emergent figures.

Belcher’s response in each chapter is his proposed third way and it is the core of the book. This is no symbolic attempt to mediate between the two sides. This is a very real, practical and reasoned proposal for being church. From my perspective the emerging church has been stuck in ‘critique’ mode. Its only message being “the traditional church is dying”. All the books I have read have not really moved the ‘conversation forward from critique to real action. The traditionalists have also been stuck in critique mode, offering no real response. Here, in Deep Church, Belcher offers a way forward – a real response.

What I love about the book is that unlike other recent books that have tackled the emergent movement, Belcher speaks as one who has a real foot in both camps. He sees the real issues that the emergent movement have raised, but he is not willing to accept the complete re-write of historic Christianity which some in emergent are moving towards. For Belcher the anchor, or the line in the sand for the emergent movement should be the authority of scripture and the traditional historic creeds and confessions of the ancient church. But that should not quench creativity in worship, relevant and exciting (but biblical) preaching and strong community which leads to a real and transformative commitment in Jesus Christ as savior.

For this reason Belcher’s book is both timely and important.

I have commented (here & here ) on my own frustrations with the emergent movement. I have appreciated the questions they raise and have sympathized with their frustrations. I was involved with an emergent type church in the UK and I have even had a chapter published in a book edited by Spencer Burke here in the States. But I also feel that too often they cross the line of biblical Christianity.

Belcher’s book thoroughly resonated with me and it is a book I would highly recommend and encourage people to read.

A number of Tornados hit Minneapolis yesterday. One of the damaged buildings happened to be the church where the ELCA were meeting to discuss inclusion of homosexual clergy. The steeple of this church was brought down by the tornado. John Piper wrote on his blog that this might be a sign of God’s judgement. READ IT HERE.

A response to this post has been given by Greg Boyd. his church is also in Minneapolis.He argues that he believes John Piper’s conclusion is wrong and gives a number of reasons / questions. READ IT HERE.

I am not trying to say one is right and the other wrong – but I found it fascinating that two excellent theologians have a different approach to this topic. Boyd’s questions on his blog are excellent and need to be carefully considered if you disagree with him. I do hope Piper responds.